As part of the exhibition on preservation of the great apes held at the Jean Macé Library, from the 12th to the 29th November, we held a workshop called « What’s your job ? »

This workshop was first planned for children and adolescents to introduce them to career opportunities s related to the  environment. It’s often hard to decide what career direction to take after completing the Baccalaureat, and presenting unique careers was a way for us to get a new generation started on new vocations. 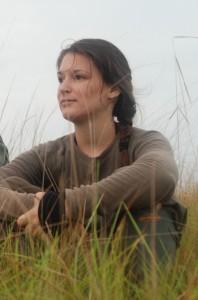 Amandine Renaud, P-WAC founder, chose to present her career, Primatologist as well as that of Environmental Project Manager. « This job is almost completely unknown to the public. Most of the time, I get two reactions whne I talk about my job:  “Prima what? Is that a job ?”… Some people think that watching wildlife or working to preserve a species is living a childish dream, a utopian ideal, but rarely do they think it’s a real job with responsibilities and very long workdays. On the contrary, I see starry eyed people who would like to give this job a try. So what better than a discovery workshop, to let everyone understand the goals, difficulties and realities on the ground that hide behind this passionate career. »

On the other hand, when we speak of “animals”people think of veterinarians. We first planned to have Dorothée Minne, veterinarian  for P-WAC, present for this day. The idea was to talk about the daily life of a field veterinarian: without supplies, without electricity, required to perform in difficult conditions… Dorothée unfortunately being unavailable,  we welcomed Sonia Maric, Veterinary Assistant in training, and also as Animal Carer, Sonia,  has worked with wildlife in tropical forests.

So what better for this workshop « What’s your job ? » than to present two little known careers: primatologist and wildlife caregiver?

Sonia : « My meeting with Amandine Renaud and project P-WAC was a coincidence. I work for the group Energy Forever in the Var region that is an ecological and teaching farm. The president, Delphine Pastor met Amandine this summer. Knowing how passionate I am about primates and their conservation, she put me in touch with her… »

After a few weeks of phone calls and email exchanges, Sonia expressed her desire to go into the field and to commit to us for the long term.  It seemed logical, for our team as well as for the public we expected at the Library, to do the workshop together.

Nathalie : « The two person presentation was really great. We learned a lot from the questioners, but also about the different training paths for the two careers of primatologist and animal carer, taking into account the reality of the day-to-day work that we often think of in an idealized way.”

Finally, instead of a young audience, we had students and people seeking a second career.  That was a really great group!!!

« Certainly because of the great weather we had that day, we only had a small audience.  But what an audience! » exclaims Sonia. « With the small group atmosphere, we had a great discussion on our various careers and the ways each of us can help bring this project to realization based on our different talents. The workshop was supposed to last an hour, but we were still there three hours later!! »

The people present were enchanted by  P-WAC and the workshop was important to explain how anyone can find a place in the project even if they aren’t a Primatologist or Animal Carer. To the contrary !!! We need so many different talents !! Exchanges with the audience were particularly passionate which made the discussions even deeper.

Sonia continues : « It made me feel good about my desire to go back into the field to work with great apes.  After completing my veterinary assistant training, I participated in field training in a beautiful reserve called Monkey Valley where I later worked.  It was a place that further opened my eyes to the importance of conservation. A few years after having worked in different zoos, I haven’t forgotten that my true vocation lies in working in the field and in taking action. »

Nathalie : « I hope that P-WAC will grow and that your project will become a reality, and if Jean Macé Library has contributed a little to the cause, even better! ».

We will answer YES, Nathalie ! The Jean Macé staff has certainly contributed to our cause in giving us the opportunity to speak about these faraway causes…but still so important to the future of our beautiful planet. Thank you for your hospitality !