Chimpanzees are threatened with extinction by human activities. It is estimated only between 100,000 and 250,000 individuals in the wild. They are classified as endangered on the IUCN Red List and listed in Appendix I of CITES. Here are the threats to their future.

Population growth, expansion of agricultural activities, institutional, social and economic decline, political instability and humanitarian crises are pressure factors on great apes that can overshadow many conservation efforts: Their habitat suffers from overexploitation. Large expanses of forest are looted for their wildlife. Deforestation has consequences for the environment: soil erosion, loss of biodiversity, climate change, desertification, fragmentation of landscapes … Whether for local or industrial agriculture or infrastructure construction, deforestation is today the main threat to great apes. The destruction of the natural habitat leads to the critical reduction of the living space of wild individuals: reduced territory, feeding areas destroyed … In our area of ​​action, it is agriculture and makala (charcoal ) production that are the main causes of deforestation. 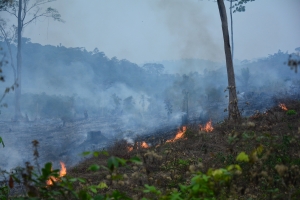 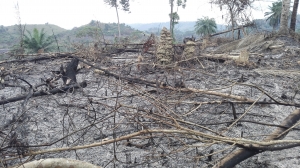 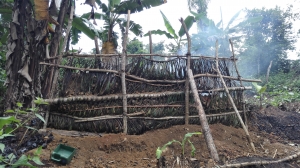 In the past, hunters used traditional weapons (snares) to catch their prey and the period of time allocated to this activity was long. Nowadays, poachers have access to modern weapons, such as guns which are easy and practical to use, and consequently leading to an increasing number of victims in a shorter period of time. This availability of guns multiplies the level of poaching and greatly contributes to the disappearance of wild fauna (not just primates, but all species who live in the tropical rain forest).

What is important to understand is that primates mainly live in social groups. Most of the time a poacher can take several individual at a time. Adult primates are sold in the market, for their meat or for use in traditional medicines. Infant primates, if still alive, are sold as pets to local residents as well as to tourists. But due to the strong relation between infant and mother, it is quite common that, psychologically shocked, the infant does not survive the trauma of being separated from its native group. 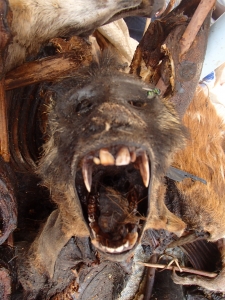 In some areas, the level of poaching has reach such a level that some still untouched forests are empty of large mammals, whose ecological role is so important for the regeneration of the forest… This situation is called the “empty forest syndrome”.

In spite of international laws and conventions (it is forbidden to hunt, eat and possess a great ape), the application of penalties for non-compliance of these laws remains largely ignored. The involvement of local authorities and local communities in a conservation project is crucial for a success outcome. Indeed, most of the time, regarded as sacred or consumed, great apes have an important role in the local culture. Finally, it is just as important that the financial support for protection comes from countries in the North.

Transmission of diseases is a major concern for the viability of populations of wild primates: contact with humans (forest researchers, tourists …) tends to increase the contamination between species. The proposed solutions to minimize contact between humans and animals, taking strict precautions such as wearing masks, screenings and vaccinations, health practices, the minimum distances required between primates and men …

Because these cookies are strictly necessary to deliver the website, refusing them will have impact how our site functions. You always can block or delete cookies by changing your browser settings and force blocking all cookies on this website. But this will always prompt you to accept/refuse cookies when revisiting our site.