Everything began last Spring, when Amandine Renaud, founder of P-WAC, received a call from Shaka Ponk. Her request had been heard! P-WAC’s projects impressed Goz!!!

It was in June that Amandine and a close friend who has helped since the beginning of the project, Amandine Contreau, left to meet Shaka Ponk in Paris.

The latter explains: « There’s a lot to say about Shaka Ponk… their talent is already a given, judging by the concerts full to burstng and by the fantastic show they put on for their fans. . But what struck me the most in our meeting in Paris (and later ones, too!), was how simple they are and the humility they showed in the presence two completely intimidated P-WACers, and the attentive ear they lended us despite their full schedule … In going to meet them for the first tim in the name  of our  « baby project », our little seed that had just taken root, I had the impression I had the impression we were going to the top of Mount Shaka Ponk. Would they see us at all from there? Would they help us???  How pleased we were when we saw their interest was even greater than we had hoped! It seems that Goz their little chimp mascot, is also concerned about the fate of his relatives in Africa, and the whole group wanted to help us. »

In October, Shaka officially announced their suppport on their social media pages. Here’s the announcement:

“Hell’O MONKEYZ….. We are happy to let you know about our collaboration with P-WAC. Goz convinced us to become patrons for this unbelievable association that fights a daily battle to protect the Great Apes, fight against poaching, educate and inform the local population, protecting the plant.  The over-exploitation of forests is truly one of the primary causes of the disappearance of our Monkeys in the Congo.

We will welcome P-WAC who we’ve decided to sponsor, in order to increase awareness, on our Zenith tour.  They’ll have an information booth on the following dates:

A second publication on November 13…

“Goz easily convinced us to support P-WAC, an association for the protection of the Great Apes in Africa.  These are young people who are doing a great job on the ground fighting against poaching of endangered species and deforestation. These young people have a project to build a rehabilitation center to take in and care fore great apes in danger.  P-WAC is also helping the villagers in raising their awareness, training them  in order to give them real autonomy while living with the wildlife and forests of Africa (creating jobs, converting poachers to become forest guides, involving women in P-WAC programs).

We need your support, a thousand ways to help.  They’re looking for “money” of course.  But also “volunteers” in France and in Africa.  The idea is to promote this magnificent project, to multiply the actions, expositions, events and the search for funds.

Even in small steps, we can all help them… let’s unite, Monkeys!

We have the honor to welcome them on our tour.  The will have a table on the following dates; don’t hesitate to go meet them, they’re waiting for you:

And a third on November 25…

As you know we support the association P-WAC . We thank them for their actions to protect the Great Apes of Africa and fight agianst poaching and deforestation. To help them, Like et Share freely so their work is not in vain. They are looking for volunteers, monkeys ready to take action to raise funds, donate supplies (microscopes, syringes, compresses, medications, binocularws, boots, lamps).  There’s a lot to do. Even in small steps, we can all do something.

Don’t hesitate to visit their site:

Amandine Renaud explains: “We’re thrilled to increase our popularity, and to be able to have our furry friends heard beyond e the circle of people already passionate about great apes , and this is due to the social media appeal by Shaka Ponk.  Because this is P-WAC’s goal:  to make the world of primates familiar to everyone, so theat the public is aware of their situation, so our fight will be bigger than the existing network of those already aware of the great apes, already aware of their uncertain future. The future of our relatives will have to and does touch everyone. Their disappearance and deforestation are directly linked to our daily lives, our way of life. Preserving these species should not concern only a limited audience. Completely to the contrary! The more the public understands, is aware, the more we will have a chance to save them. I believe tht by the . I think that through our sponsors, we will make the voices of the great apes heard.  With the appeal of  Shaka Ponk, I hope that many people will become aware that saving a species, in our case, the great apes, means saving their environment, people too.”

The Adventure ” P-WAC on tour ” began in October 2014, at Cournon d’Auvergne.

« It was with great pleasure that we accepted an invitation to set up a booth on their tour ! We were always warmly welcomed and spoiled by the entire team ! » (Amandine Contreau) 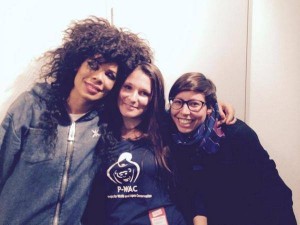 Émeline and Amandine, with Samaha 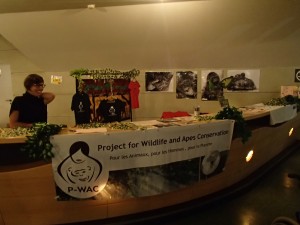 Émeline, ready to meet the people of Auvergne.

At the first concert, the public was discrete. The adventure had only just begun : we explained the reason for our presence to the public. A few great apes lovers were enthusiastic to visit with us.

We continued the next day in Lyon, at Tony Garnier Hall. P-WAC headquarters is near Lyon, so because of that we are a little better known and had more visitors.  We were thrilled to see so many curious fans around our booth.For this event, Guillaume, Chantal, Amandine accompanied by Patricia welcomed the Lyon public. 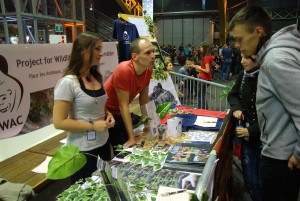 Guillaume and Amandine present P-WAC to the first interested fans 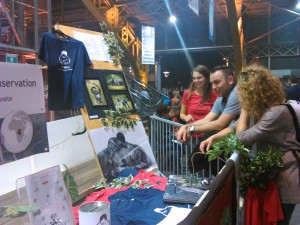 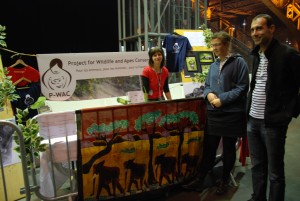 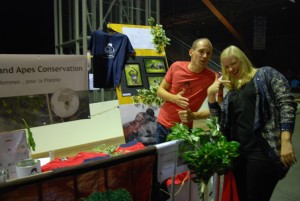 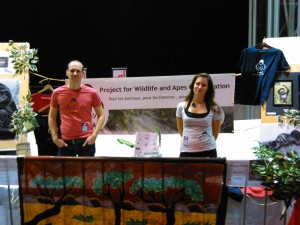 Our booth at the entrance to Tony Garnier Hall 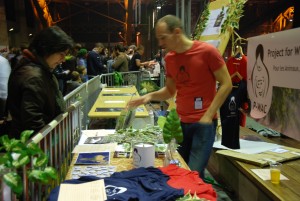 Guillaume presents our items for sale. 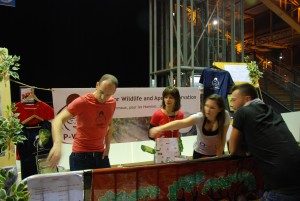 In November, the Amandines found themselves at concerts in Marseille and Toulouse, along with Julia. 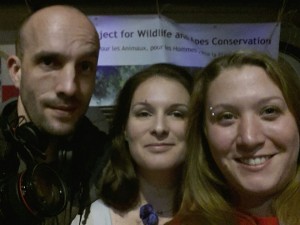 Korki, the Shaka Ponk cameraman came to visit our booth… 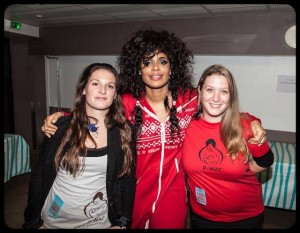 The Amandines with our “godmother’ in Marseille 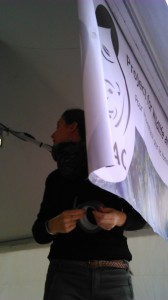 … Except in Toulouse, because of a heavy rain, our booth was a bit wet cloth!!!! We spent part of the evening drying everything out… But on the positive site, we were able to see the entire concert for once! 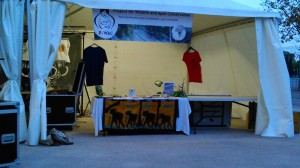 The booth before the Toulousian rainstorm 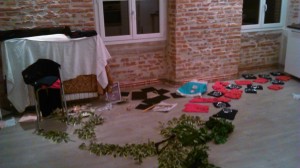 Our things drying out for two days at Julia’s place.

We finished our tour with our patrons at Paris Bercy … « We get to our spot, we installed the booth, we drank scotch, we folded t-shirts, we climbed, we crouched… in short, anything to make the booth look great and be as beautiful as possible. .» (Amandine Contreau) 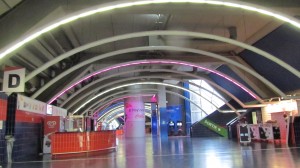 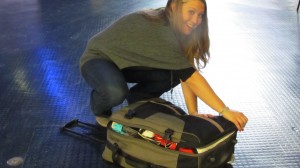 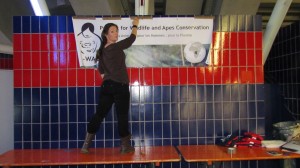 P-WAC banner. Practical, but we would like a Kakémono, easier to set up! 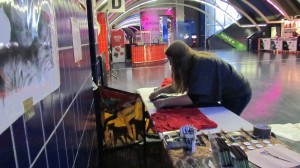 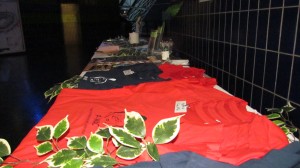 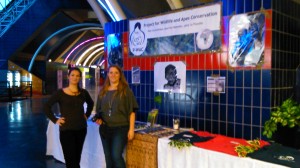 The Amandines in front of the finished booth. Ready to welcome the Parisians.

In Paris… we are happy to be back and being welcomed.  « We’re waiting for the curious, n attend le curieux, we watch for awareness, we make room for the open-minded… And some times it works! I had a lot of fun talking with the public, of all kinds, of all ages… my best memory is a little 10 year old boy from  Marseille  who dragged his dad to the booth, grabbed his wallet that dad kept safe, in order to make a donation to P-WAC. Barely 10 years old! And already such an altruist! That really touched me. And so when P-WAC goes with their patrons on tour, it results in great conversations and music that takes you away!!!! » (Amandine Contreau).

All the people who came to see us came first becuase they were interested in protecting animals, but also especially because they were following our activities on Shaka Ponk’s Facebook page! The messages posted by our patron made people want to know more about us. 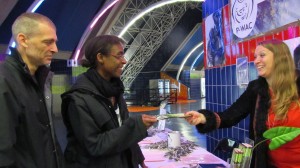 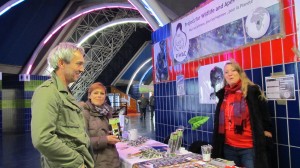 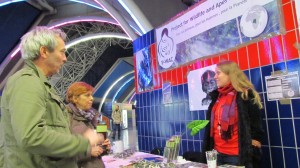 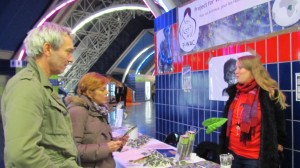 After the concert, we joined our Patrons, whose work is rewarded with Platinum records!! 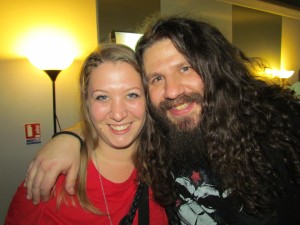 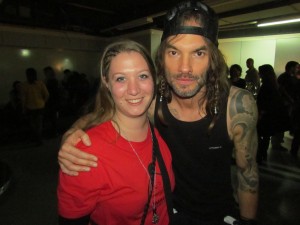 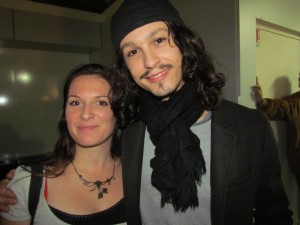 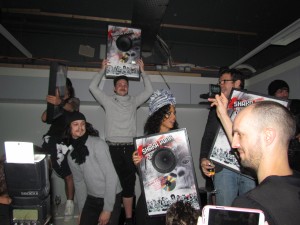 We’re thrilled with this beginning of our collaboration… Thanks to Shaka Ponk, our patrons, for their support ! And we’ll see you soon for more adventures of P-WAC/Shaka Ponk!