This year we participated once again in Salon Primevère!!

This year like in the past we participated Salon Primevère. This alternative environmental Expo brings together businesses with a strong environmental ethic, and alternative radio stations and media, and like-minded charitable organizations. 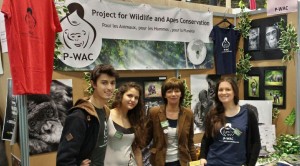 Loïc, Mégane, Chantal and Amandine, in front of P-WAC’s booth

So P-WAC was present for the second year, with a committed team and happy to present our education mission in France and our project in the field.

For three days we informed a curious public, adults and children, about our mission.  Our photos of great apes, those of our partner Stéphanie Meng, the work of Laurence Saunois attracted astonished looks, with our booth having the allure of a traveling exposition. Our patron, SHAKA PONK, present on a poster,  also attracted a lot of fans among the public.The attendees at Salon Primevère are already pretty aware regarding environmental causes, but some are not yet very informed about deforestation and the consequences of poaching.

Despite the serious subject matter, our team worked in a positive atmosphere!

« As a new P-WAC volunteer (I met P-WAC at the « What’s your job» seminar in Lyon in November), I was thrilled to meet the other members of the team at Primevère and be able to discuss and also learn with them to explain our cause to the public. Our booth was very welcoming ! « Jungle » decor, with photos, videos and drawings, we made several audio-visual presentations available to the public to spark their curiosity but also to raise their awareness.  We had a few great encounters during these days of teaching, notably with children who were able to read the work other students had done in class. New members and renewing members from 2014, meetings with « shakafans » who were aware of us from our patrons…the weekend was very enriching!!  Our educational materials allowed us to paint a realistic picture of the project on the ground for the public. Lots of people asked questions about bushmeat. Our videos shot in Kinshasa were looping non-stop in the booth and were really important to raise consciousness. For some, the problem is the local population. But let’s not forget the role we all play in the disappearance of species: palm oil, tropical wood, we are all involved and responsible, even if the link seems hard to make for a cause that’s far away, geographically speaking». (Valérie)

Amandine and an animal lover

The team in action

We took advantage of this exposition to share a few informational posters put together by the students of the Grande Prairie School of Montalieu. The children who came to Primevère were thrilled to be able to see educational content intended for children and only for children! What touched us was to see that this work helped pass along the message from children to other children! And their parents!

Panels created by the students of Montalieu

A mom and her little girl, examining the educational panels

Other curious children, like Ornella (11), touched us with their awareness and their knowledge about the preservation of wild animals! 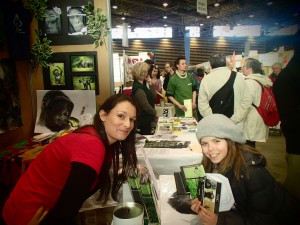 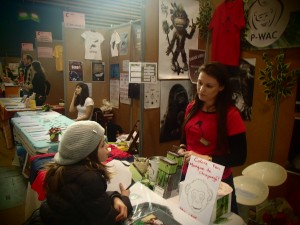 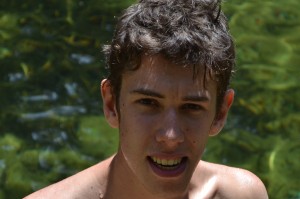 « I  came to the P-WAC booth because I had learned about them on  Shaka-Ponk‘s Facebook page. After that, I continued to follow the association’s news. So I knew that P-WAC would be at Primevère  and I came there because I was really curious to learn more about the project. It was the idea of a care center for great apes that touched me the most: I’ve been passionate about these animals since I was very small, and a center for apes in Africa  has been my dream since I was a little kid. I was immediately engrossed in the project. Because the project is only beginning, I think I can be very helpful, so I wanted to invest as much as I could since then I’d feel like I was really accomplishing something, something that meant a lot to me. At the booth I met Amandine whose job fascinates met and with whom I share a passion for (great) apes. Right now in high school, next year I’ll be taking  biology courses and I’d really like to make this passion my career. Maybe P-WAC will help me with my studies ! I want to help this project as much as I can even if I’m not yet a specialist. »

We are thrilled to see someone of a new generation so motivated and now a member ! Samuel, who came to our General Assembly, became one of the youngest members of the project, and his energy is welcomed by the rest of the team ! 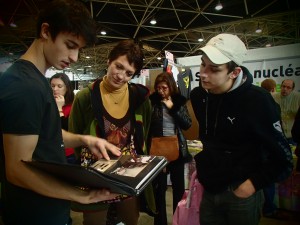 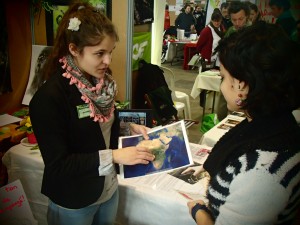 Primevère is also a time to get to see old friends of P-WAC! 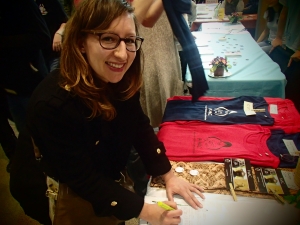 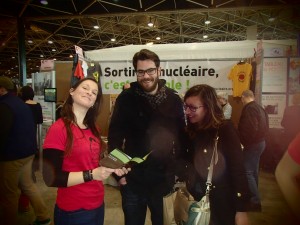 Amandine, Jérémie and Claire in front of the booth

Beyond raising the public’s awareness and welcoming new members, we were able to show and put up for sale some items to benefit  P-WAC: T-shirts, postcards, buttons, pens…

During the Expo, we were invited to participate in an interview to talk about our mission. It will be available to view soon !!

The end of the Expo… We pack up everything! We’re tired, but the happy atmosphere keeps us going! Thanks to everyone for sharing this time with us and until next year! 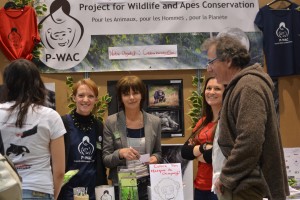 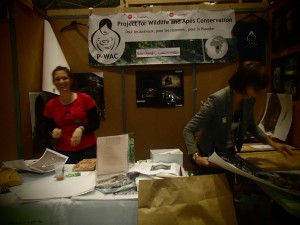 It’s over! We’re packing up! 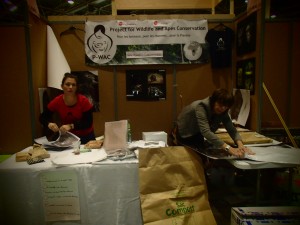