Vous êtes ici : Accueil / Blog French / Blog / What is the meaning of the P-WAC logo?

What does the P-WAC logo mean?

To answer this question, we asked Antoine Benini, 21, the co-creator and designer. 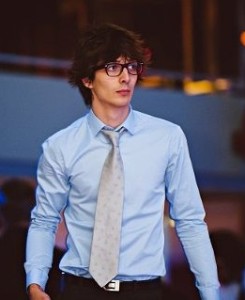 « At the end of 2013, Amandine Renaud, primatologist and founder of the new P-WAC  project,  appealed to students at my school, Sup’ de Com’ (Lyon) for help in creating and developing the communication and visual identity for the association.

For those lucky enough to already know P-WAC, we know that this is a very open minded association, that, above all, is willing to listen to its partners, something that made me immediately jump into the project. In addtion, coming from an agricultural area and having had some experience with exotic and European animals, my awareness of P-WAC‘s cause helped me in my decision to come and help  Amandine.

As a young student in BTS communications, my first mission for  P-WAC was to come up with a visual identity for the group. I looked at what had already been done in the sector, then after a few exchanges with Amandine, I put together a few drafts, which I limited to three and then passed them on for comments to my colleagues (professors, friends, P-WAC…) to see which best met their idea of the values of the association. After reflexion, discussions and modifications, we decided on the logo with the woman carrying a chimpanzee in her arms. »

« What a wonderful surprise I got when I received a positive response from  Sup’de Com’. And what good luck it was for me to have met Antoine. So young and already so dynamic and engaged in animal causes. Of course, I would have been thrilled to work with any other student who wanted to get involved in the project. But to know that in front of me, I had someone who was aware of animal causes, really concerned for our environment, for our beautiful planet, who had already made a trip for an animal cause to Africa, I was really delighted. The contact between us was completely informal. Antoine wanted to know more about my own journey, to better understand me I think, but also to know more about the project, what I had in mind that I wanted to accomplish.  After long hours of conversation in a  café in Lyon, we continued to work mainly by email. He had a few questions from time to time, but not much more than that. I began to wonder what he was going to show me. When we finally met for him to present the three logos that he had selected, I immediately knew that he had completely understood what I’d had in mind.  It was as if we were taking a great step forward for P-WAC.  When you start a project, in the beginning you feel a bit alone with your thoughts and objectives. You have to think of everything. The pros, cons and how-to’s… You explain what you want to do, you look for partners.  But to throw yourself into such an adventure: create a rehabilitation center for primates in Africa… that made a lot of people smile. So, when Antoine brought out his draft schetches, enough to say I was really emotional. He completely got what I wanted and captured the values of the project that until then I only had in my head.  He got how important it was for me to involve women. It was a new stage for P-WAC, a premier even: Antoine had just given birth to P-WAC. He made an idea real. And in a totally simple and honest manner, like the logo ! We settled on the one logo that spoke most visually: « The woman with apes». 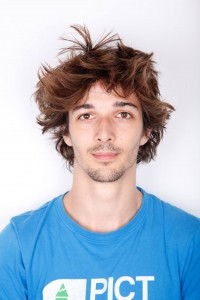 « Certainly, primates have the primary place in the association, but the involvement of Congolese women on the ground carrying out the conservation activities is very important. In my mind, this logo permits us to distinguish ourselves from other projects in visualizing a plan that goes full circle where the ecological pillar is as involved as the economic and social. For me, the logo illustrates the main components of the organization.

As far as design, I didn’t put any eyes on the silhouette of the woman to allow every woman, here or anywhere, who wants to get involved with P-WAC, to see herself with a chimpanzee in her arms. This is s symbol of protection that I wanted to communicate here. The chimpanzee itself is smiling and raising its arms to the sky. Not just a stretch, but to give the logo a dynamic sense since otherwise it might appear sad without this cheerful gesture. And finally, the choice of colors was kept simple like the forms in the logo so it would work well in all sorts of media applications. In the end, working on the visual identity of a new and dynamic association called for a sexy logo, something I still strongly believe today.

The year 2014 was a successful year for me, and in particular because of the contest for the animal logo for Amandine and her association during my preparation of my dossier for my school exams. Through the opportunity to work for P-WAC, I got a 17 on my oral defense exams. It was a real pleasure and at the same time a passionate experience to work on this project… Don’t hesitate to get involved in an association, you’ll gain a real sense of pride in doing so. »

For us, this was the real begining of the adventure. Our identity was born, an identiy that looked like us. After that followed the website, with which Antoine also wanted to get involved along with our partner Horizon Web Marketing, who offered us a very professional webiste and other communications tools. Antoine today is very proud to see his creation displayed on our website and on that of our patrons, Shaka Ponk. A pretty big promotion of his work!

Amandine concludes «I was so pleased to cross paths with our young Antoine. He still gives us a hand from time to time. Always with the same energy. The adventure has begun thanks to him ! »

Bravo Antoine, and especially, Thank You!!